There aint no party like a spam bot partay 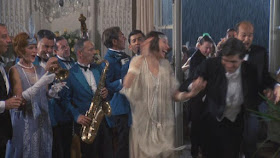 Q. What do the following people have in common?

A. They dont exist. For the past couple of weeks I've noted down the "name" of the spam bots messaging me on twitter. Goodness, spam bots are irritating, yes. But look at these names - aren't they fabulous?

I often have a gentle chuckle to myself at some of the random combinations that are generated by our bot chums. Vaksman Innes, Hoaglin Little, Marylou Freas - surely the names of previously anonymous guests from one of Jay Gatsby's parties? Tanisha Hendricks, Lee Buffet, Tish Dreith - straight from a Jilly Cooper novel? Tia Printz, Cryssie Amberd, Runels Stewart - straight from whatever the cool high school tv series du jour is? And poor old Greg Jeffries, tagging along beside all his more glamorous friends...

What is it about the randomly generated names that make them seem so fascinating, so charismatic? The combination of strings of known characters wont take into account any of our tacit understanding of the cultural norms of naming, nor its traditional sounds, beats, or cadences. It makes them seem other wordly, known but ridiculous, celebrity like. Which means perhaps we will pay them more attention? The names are delibrately set to be at the rare and obscure end of the naming bell curve?

An article from a good few years ago in the New York Times - before Twitter was even imagined - summed up the automatic name generation tools used by spammers - suggesting that online tools such as the Random Name Generator (based on data from the US Census to randomly generate names, with even a setting provided for how obscure you want them to be) are routinely used to generate these never-were spammers.

I'm as irritated as the next person by spam. What a waste of our resources. But in some alternative universe, my people-named-after-spam-bots are dancing late into the night, Vaksman with Marylou, Tanisha with Lee, the growing spam roll-call being the mother of all social-media party invites spiraling out of control.
Melissa at 20:11